The first thing you’ve got to know about a clean-up is that you don’t do a clean-up after a clean-up… Yes, there was something remarkable during our CleanUp event in Bleau during the Women’s Bouldering Event on 17 September; Elephant climbing area was pristine! Yet, there was enough to do for the 20 volunteers who showed up for our joint clean-up with ace climber Tiba Vroom from Wildflower Climbing!

Soon after planting our beach flags on the parking at Elephant, we realized there was less work to be done than expected. While the blocks had been well taken care of by a kindly group of locals in recent weeks, the main dumping grounds near the village of Larchant. Clean-ups, however, are more than just picking up rubbish. More important is our ability to meet with like-minded individuals, connect to other organizations and exchange knowledge. But we’ll get to that, first we dove into the bushes and picked them clean on the parking strip and impromptu camping spot. A lot of thrash clutters the edges of climbing areas, and while climbers are likely to be blamed, they’re probably not the culprits. Showing our good intentions by cleaning up is always a good thing in showing the locals that we, as climbers, care about the area too.

We were especially honoured by the presence of Tiba from Wildflower Climbing. The Dutch climber is building her own gym for boss-level climbers, and is a passionate voice for sustainability in climbing. Having her represent us in part during such an event is fantastic. Tiba supported us in promoting the CleanUp and warmly welcomed participants together with our ever-courteous chairman Gerard. Though there was less cleaning to be done than expected, the ever-sharp Tiba noticed an exceptional amount of chalk on the rocks and joined by a group of fellow volunteers went on a brushing spree. They also discussed chalk ethics with various visiting climbers, many unaware of its impact.

The yearly Women’s Bouldering Event revolves around climbing for women (the name does kind of give it away). The event does not exclude men, but it strives to create a safe space for women to climb, interact and explore outdoor climbing. Justina Segers, who photographed the CleanUp, also joined the climbing event on Saturday: “It is very pleasant to be among women, who share insecurities or maybe lack experience in outdoor climbing. It creates a sense of togetherness and inclusivity, where you help each other out in a non-invasive way. For me, this was a very pleasant experience.”

What we like to achieve mostly on events such as these, is to connect and share our message with others. When an impromptu gap in the program opened up and allowed us to host a talk about sustainability in climbing, we obviously took the opportunity with both hands. Tiba was willing to join us on stage for a discussion on the wider topic. On behalf of Clean Climber, Justina kindly took on that role to talk about the ReSole program and other initiatives. Though there was little preparation, the talk was a big success, with both ladies speaking passionately about the topic and their appreciation of nature. Visitors participated enthusiastically, sharing ideas and experiences. Of particular interest was the participation of Francis from Chalk Rebels and local fire marshals in the discussion. Did you know a smouldering cigarette thrown in the sand can cause a fire up to three days later? Now you know, and a lot of people know. And that is the best possible result of an event for us, connecting to others and together growing our awareness. 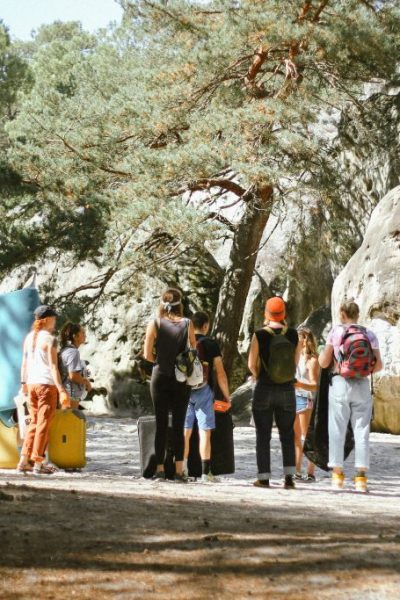 Our thanks go out to Tiba Vroom/Wildflower Climbing and Justina Segers for their participation and support during this event in helping us reach others and spread awareness. Special thanks also to Zofia from Women’s Bouldering for having us, supporting us and so enthusiastic and kind. And to all volunteers for showing up and helping out. Everyone can be a Clean Climber. If you’d like to know more about Women’s Bouldering Event, visit their website. 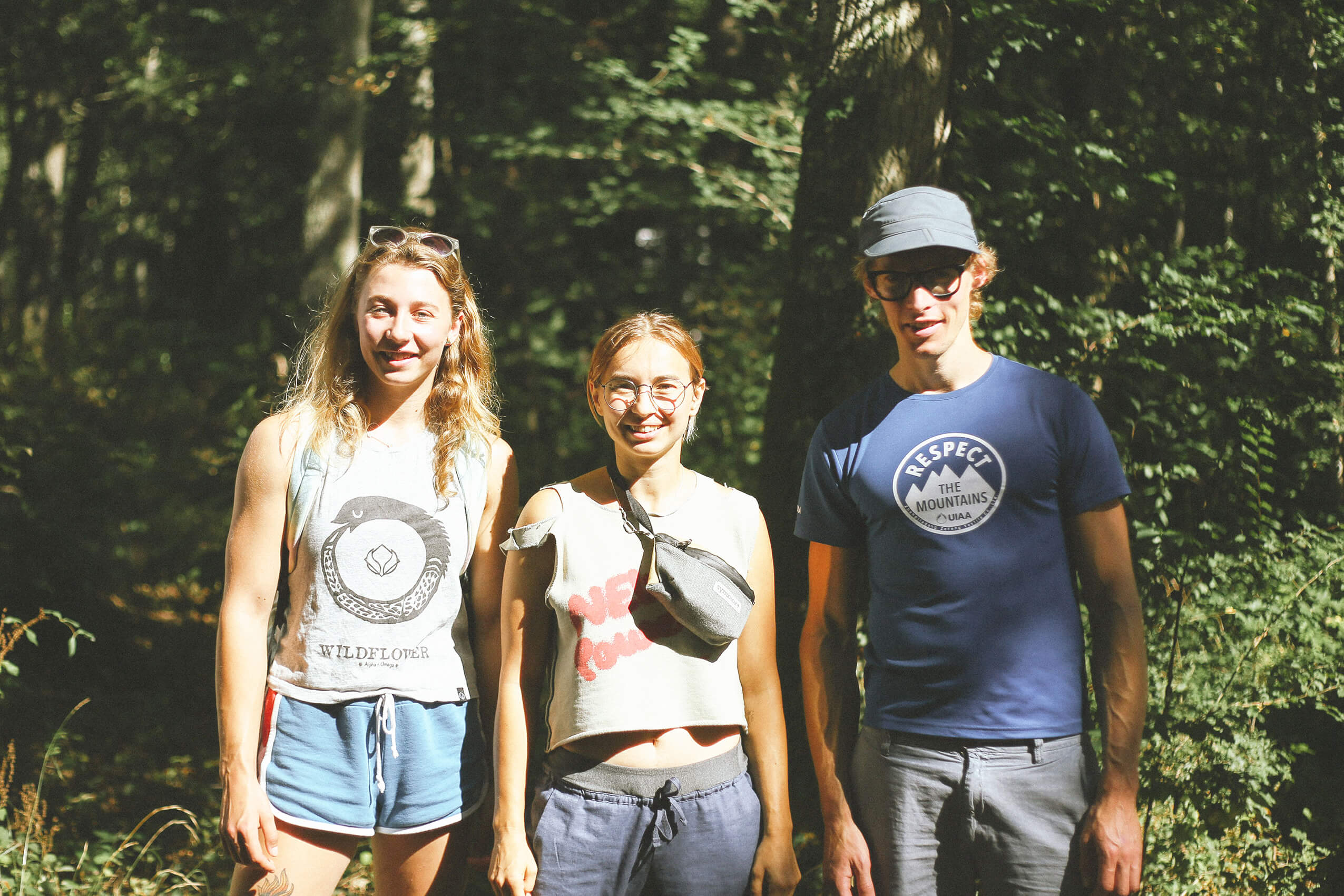 Chalk Rebels are a company that we hold close to our heart, as they try to make the climbing sport better through sharing information, disrupting habits and providing climbers with excellent products in a way that we think is a bit rebellious in itself. Chalk Rebels are cool, but they’re not cool with the amount of chalk we’re all using in gyms and on the rocks. We felt that was a good topic for a blog, but who better to talk about this than the Chalk Rebels themselves? Here goes.

Just so you are aware, Chalk Rebels just released their crowdfunding for a more sustainably produced chalk. Get yours here now!

CHALK REBELS are Francis Dierick & Tianyi Gu. Passionate climbers from Belgium and The Netherlands. We produce liquid magnesium and skincare products for climbers. Our mission is to reduce the use of magnesium powder in the climbing world. Too much magnesium causes unhealthy dust clouds in climbing gyms and ugly, whitewashed rocks outside. We develop alternatives & educate about the subject.

I (Francis) find this important because after 30 years of climbing I see a huge difference on our beloved rocks. Popular areas (e.g. Berdorf) and boulders (e.g. Karma, Font) are completely white. With climbing becoming even more popular (Olympics), the over-frequency of areas may eventually lead to closures. Therefore, we try to encourage moderate use of magnesium in order to prevent further damage.

We have called ourselves “Chalk” Rebels in a kind of Anglicism because what we call “magnesium” is simply called chalk in English. Chemically completely wrong, but now established among climbers. And because we have international ambitions, we simply call it Chalk. Rolls off the tongue more easily. And many of our partners don’t speak Dutch at all. We produce in Spain, for example.

In the climbing halls, the overuse of magnesium is problematic because it creates clouds of fine dust. Not much fun for the workers. And certainly not fun when you have to vacuum up the dust every day. The impact on health is still unclear: on the one hand, the particles are too small to cause health problems in the long term. On the other hand, there is hardly any climbing hall that meets dust standards for workplaces, and magnesium does have a short-term health impact. So the message is to cut down. And liquid magnesium is a good alternative. Fun fact by the way: pot balls have virtually no impact on dust in the hall. The only thing that works is NO powder or switching to liquid.

Outside, the impact is mainly visual and not so nice for the sport element. There is no more onsight climbing in many areas. All grips are nicely marked with white tick marks or completely whitewashed. Visual pollution can also become a problem because we share our climbing areas with other nature lovers and they naturally question this pollution. Not to mention recent scientific research shows that magnesium has an impact on moss and plant growth even if it does not leave visible traces.

The product of magnesium powder is also not a very clean activity. It is extracted in large mines, 70% of it in China, in a process that uses a lot of fossil fuels and causes a lot of local pollution. Easily visible on satellite images.

What Chalk Rebels does

CHALK REBELS tries to help in two ways. 1) Product development. We have developed an alternative form of liquid “magnesium” which is transparent and does not leave any traces on rock or create dust. We are also developing new forms of classic white “liquid” magnesium. The latest innovation is that we have found a formula that is twice as effective as normal magnesium and that is extracted from seawater. So no more polluting mines. 2) Prevention. We realise that magnesium use is completely ingrained in the climbing world. We think it’s a bit like smoking. A bad habit. Forty years ago, it was perfectly normal. You can’t change it overnight. Hence our slogan “LESS CHALK”: let’s simply start cutting down. Switching to liquid whenever possible is already a first step. But no magnesium is also possible. Simon Montmory, for example, climbs 8C barefoot & without magnesium.

What we and you can do

We think that the Olympic Games will further popularise the sport. We think it is important to encourage beginning climbers to use liquid magnesium. Because what you start with, you continue with.

We recommend the following to everyone:

Climbing gyms may encourage the use of liquid magnesium. That’s good for their employees, good for the climbers & good for their wallets. Because all that dust adds up to extra cleaning costs.

In November Chalk Rebels will be running a crowdfunding campaign to switch their production process from mined magnesium-carbonate to a more eco-friendly seawater-based process. Subscribe to their IG to stay in the loop. 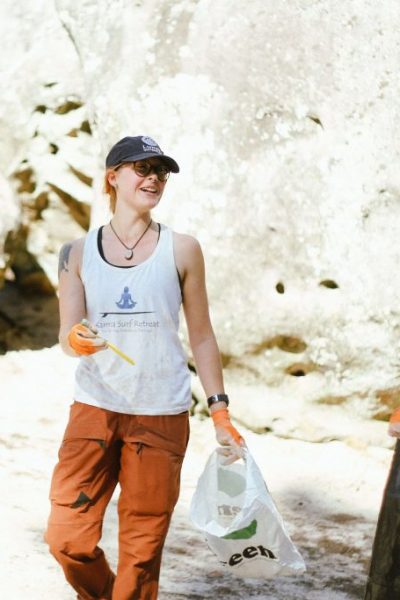 Want to check out your chalk use and what alternatives you can get? Head down to Chalk Rebels to read more about chalk and check their solutions (to clarify, we are excited about the company Francis and Tiny run and have no stakes in Chalk Rebels).